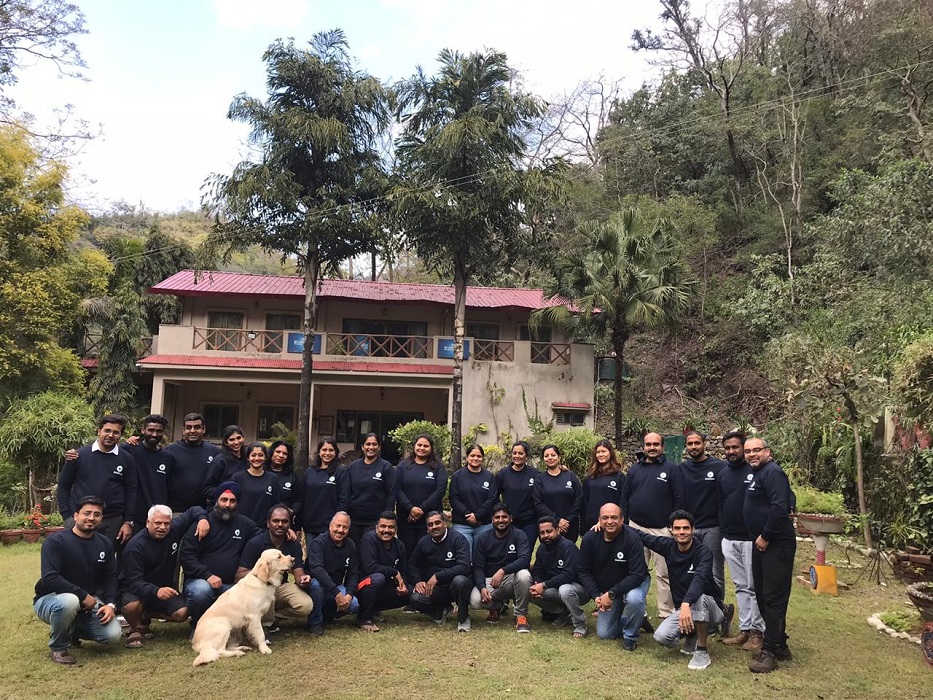 07 May The IKAN Managers Conclave 2020 – Rishikesh

This was my first IKAN conference and I have taken the liberty of sharing my experience.

IKAN Relocation is the leading relocation services provider in India. As a part of its annual program it organises a manager meet each year. In March 2020, it held its annual conclave at the temple town of Rishikesh, on the banks of the river Ganges and in the Northern hill state of Uttrakhand. I had the pleasure to be a part of this wonderful experience.

Thirty managers from IKAN got together at Rishikesh on the 12th of March and conducted a series of exercises and stayed together until the 15th of March. I was part of the Bengaluru team. My colleagues from other locations, Pune, Mumbai, Hyderabad and Chennai flew into the Dehradun airport on the morning of the 12th of March approximately around 10:00 AM IST and headed straight to the “Bull’s Retreat” in Shivpuri Rishikesh, an hour’s drive from the airport. The Bulls Retreat is named after colonel Narendra “Bull” Kumar, a highly decorated Indian soldier and mountaineer, who in 1984 captured the Saltoro Ridge and the entire Siachen glacier for India. During our drive to the Bull’s retreat, we stopped at a restaurant (Tip top – shown in the picture below) for breakfast. The whole team had aloo paratha’s which some of them had never tasted it this good anywhere. We reached Bulls Retreat by around 12:00 PM. We all caught up for a tea break and followed by Lunch and our Delhi team also arrived by road, driving up from New Delhi to Rishikesh. The Delhi team brought along “Laila” a golden retriever, who became a mascot for the conference.Post lunch, the group participated in a team exercise aimed at improving our team work, trust, listening skills and patience. Another activity we participated in was to create a zipline with ropes from tree to tree, we were again divided into two teams and we started the activity. We were taught to handle rock climbing ropes, caribinars and also how to make knots. Some if the important knots I remember making was, a bowline, a clove hitch and a sheet bend. It at least required 7 to 8 people to pull the ropes and make adjustments to create the zipline and then zip along the line once ready.

After the day’s events, a camp fire was set up and we had a party and stories were shared. Our Managing Director Mr. Rohit Kumar took us through a small story of how IKAN had its first managers meet in 2003 in  Rishikesh. He also discussed the journey of IKAN over the years and also thanked most of our team members for their continual efforts. There was a sudden change in the weather and it started to rain and we all had to rush to shelter (it rained hailstones) thus bringing the wonderful first day to a close.

The overall IKAN report card was shared by Mr. Rohit Kumar followed by presentations from all managers. Some of our colleagues shared their thoughts and ideas on how the company can continue its forward journey, further ensuring that every employee of IKAN was a stake holder in its success and the company belonged to each one of us…

It was a wrap for day 2 and we all had to head for dinner around 8 pm. A lot of knowledge and information was shared by the management to everybody and a lot of discussions ran in between the team members in foreseeing our approach to transaction into 2020. It was the day to test our belief, strength, teamwork, efforts and listening skills. One of the most dangerous and furious white-water rafting courses on the Ganges was organized by the company. A 30 km run containing 18 scary rapids to overcome, some of them Grade 3 and Grade 4 rapids. There were no exceptions and each member of the group was on the rafts. Before we got on to our boats, the guides and life guards gave us instructions and taught all of us about safety precautions. We all boarded the boats and a thing to be noted here is, two of the most senior employees in the organization board the same boat that I was in. One of the members was really scared of water but still took this up as a challenge and we started to row along with the other boats. I was sitting right at the front with a lot of Adrenaline pumping. The view around was just lush green mountains, this created an illusion like the mountains were moving since the water was also green and the sky upfront was blue.

We entered the first rapid, three blinded mice! We overcame the first two mice but our boat took a bad hit on the third mice where one of the members fell into the water. The hit was so fierce I could just remember shouting “we are all fine; we are all fine” but did not realize for a few seconds a team member had fallen off the boat. We all realized that this occurred since the commands from the guide were not followed precisely. Pooja B from my boat took up the responsibility to repeat the commands provided by the guide. Our boat never stopped, toppled or faced any more hazard thereafter and we all successfully completed the 30 km river run.

Almost the entire team had never done white-water rafting and this experience gave every one of us with a big learning. At the end of the run was the town of Rishikesh. and some of us visited the town and stayed on till the evening Aarti, again a lovely experience taking our lunch at the iconic “Choti wala” restaurant crossing the Laxman Jhula bridge on foot. The Jhula was 450 feet in length 6 feet in width and the bridge was built in the year 1929.

One of the most amazing sights for me to remember was the huge statue of lord Shiva towering over the town. There was this pathway built to go closer to the statue of lord Shiva and the whole team took a walk and we could see the statue up-close. The Ganga aarti was performed at 6 PM and most of our team members participated in this event. It was like a celebration; the chants became ten times heavier and all I could see and feel was beautiful lights performing the pooja to the river Ganga on its banks.We crossed back over another Iconic “Ram Jhula” bridge coming out of the town near the Sivanada Ashram of the divine life society and boarded our bus to return to the “Bulls” retreat, a 45 minutes’ drive where the awards ceremony was to take place around 8 PM. During the awards ceremony, the management announced that medical insurance cover had been procured for every employee of the company and their families. We also discussed the challenges we would face over the next months due to the COVID19 Pandemic and the disruptions that it had caused and we put together some strategic plans before proceeding with the evening awards function.

Post the awards ceremony, we had a special Kashmiri dinner put together by the wonderful “Arif” and some of us partied till late. Many of our team members turned in early as most of us had to leave the retreat at 6 AM to be able to reach Dehradun airport in time to take our connecting flights home.

It was such an amazing, knowledgeable and a fun filled offsite as a company. The teams were left with no other words but to thank the company for pulling such a wonderful and successful event that everyone would never forget and we look forward to the next year when we all will get together again at some other remote location.

Joe has been an integral member of the IKAN Bengaluru team. As a destination consultant, he accompanies the expatriates and returning Indians on home searches, orientation programs and also extends settling in services. His pleasant demeanour and always ready to help attitude helps him win the immense appreciation of his clients. He attends to any requirement with much gusto and always wears a smile.